As a book connoisseur (some might now even call me a critic), I’m pretty easy to please. When you read finance material all day at work, you’re happy to absorb any form of creativity. Very seldom have I found a book I can’t finish or that fails to light the tiniest of sparks. But finding a full-on scorcher is even harder. That type of material is the stuff of J.K. Rowling, Ann Patchett, and Emily Giffin. I might enjoy a lot of books, but I can’t hand out five flames for just anything. Therefore, I am happy to give you Big Little Literature’s first ever inferno.

Maybe it’s because this stellar novel was published on my birthday, Feb. 14, but I instantly connected with Lincoln in the Bardo. I read it during a particularly painful flight experience to and from Denver. Counting delays, this totaled about 10 hours, but with Lincoln, it felt like two. This story will surely dominate every Best of 2017 list; it’s already dominated mine.

George Saunders, one of Time‘s most influential people in 2013, began writing his multigenre and first novel after hearing the tale of Abraham Lincoln paying multiple visits to the crypt of his son, Willie, after he died at the age of 11. What he created wasn’t just a fictional story about life after death but a creative venture that took me into the past and into another world.

Lincoln takes place in the bardo (a reference to Tibetan Buddhism) where souls go after death but before they go on to a self-perceived afterlife. This is where they “tarry,” according to the main ghosts, Hans Vollman and Roger Bevins III. When Willie dies and is taken to a crypt in Georgetown’s Oak Hill cemetery, he meets an interesting cast of characters living below who are all in denial about being dead; instead, they think they’ve simply fallen ill into “sick-bodies” as they refer to their coffins as “sick-boxes” and graveyards as “hospital-yards.”

Saunders implies that an unfulfilled and ungrateful life will leave you lingering in this space. And until the ghosts realize this and are ready to accept their fate, they must stay in purgatory. Figuring out why Willie is still there and if he should move on is an enjoyable venture for the ghosts and the reader.

“Strange, isn’t it? To have dedicated one’s life to a certain venture, neglecting other aspects of one’s life, only to have that venture, in the end, amount to nothing at all, the products of one’s labors utterly forgotten?” — Lincoln in the Bardo

The most compelling part of Saunder’s tale is how he weaves together various genres into the smoothest of storytelling. It felt like a genre all on its own. I first added Lincoln to my to-do list because it sounded like historical fiction, my favorite, and I especially love reading a good war story. But Saunders gave me so much more. In Lincoln, Saunders spins a supernatural tail set in purgatory where you feel like you’re reading science fiction, biography, history, and contemporary fiction all at once.

Saunders must have done some extensive research to reach his finished product. Interspersed among the graveyard scenes are quotes from numerous nonfiction sources to provide context for the time frame as well as the public’s feelings toward the war and the Lincolns. In keeping the structure cohesive, Saunders poetically merges nonfiction with the supernatural by sourcing the ghosts. They are individual storytellers so they too serve as historians, experts, and witnesses in Willie Lincoln’s time in the bardo.

Example of the ghosts’ storytelling. 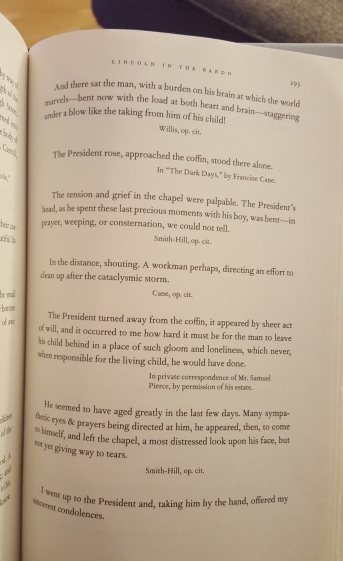 This is by far the most unique and creative structure I’ve seen in a story. It captured my full attention and left me wanting more, until the story’s conclusion, which kept me fully satisfied. Saunders wrote well-rounded characters, delivered a fully developed plot, and created something never done before. It’s these qualities that, when combined, made this book truly lit.

But many reviewers took issue with the chatty ghosts. Although The Guardian‘s Hari Kunzru enjoyed the humor and dialogue, he wanted more Lincoln. “The busy doings of the spirits are entertaining, and Saunders voices them with great virtuosity, but the tug of Lincoln’s grief is sometimes too strong for them not to feel like a distraction,” Kunzru wrote.

But to me, this story wasn’t about Lincoln. He was a supporting, albeit significant, character. Lincoln in the Bardo is about about death in general and not Lincoln’s grief specifically. Had that been the case, it would have been another story entirely. Depth isn’t lost in this way. Rather it’s manifested across many spirits and their individual experiences and realizations of death.

Kunzru is still a fan though. “Lincoln in the Bardo is a performance of great formal daring,” he continued. “It perhaps won’t be to everyone’s taste, but minor missteps aside it stands head and shoulders above most contemporary fiction, showing a writer who is expanding his universe outwards, and who clearly has many more pleasures to offer his readers.”

I’m not sure how Lincoln in the Bardo couldn’t be someone’s taste–not sure I want to know them. And clearly I didn’t find any missteps because Saunders deserved every spark in the five flames.

One thought on “This Book is on Fire”