You never know what you’re gonna get. For main character Lillian Dunkle, that was quite the case, as she navigated life from being an impoverished and abandoned immigrant on the Lower East Side to a national phenomenon living on Park Ave. And as a reader, I definitely didn’t anticipate that The Ice Cream Queen of Orchard Street would be the Forrest Gump of the dessert world. But that’s what Susan Jane Gilman gives us in her debut novel. From Ellis Island to the conservative movement of the 1980s, Gilman provides us with a lesson in American history through the lens of her main character, much like Winston Groom did with his 1986 novel.

If you’re going to follow the concept of a book that led to a Best Picture Oscar, then you have to nail it. Gilman does. She chooses a strong and interesting, albeit abrasive, character to lead her tale. And she keeps her storytelling consistent with the same humor, drama, and characterizations lasting for 500 pages. 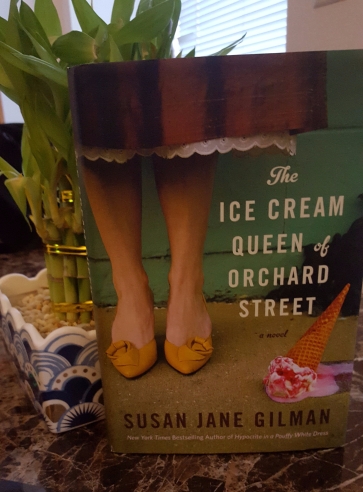 When I bought Ice Cream Queen, I was expecting an immigrant tale of a woman who follows the American dream and pulls herself up by her boot straps. All the cliches. Boy was I wrong. Not that Lillian Dunkle’s story of crossing the Atlantic wasn’t tough and touching, but she leaves little room for sympathy and empathy. Instead, she packs a punch full of sarcasm, sass, and smarts.

The story is told from the point of view of 75-year-old Lillian as she regales her audience with her life story while intermittently catching us up on her present-day drama. In 1913, Malka Treynovsky flees Russia with her hard-faced mother, scheming father, and three sisters amid pogroms. Once they arrive to New York, they quickly learn of the hardships of coming to America: extreme poverty, claustrophobic spaces, and ethnic clashes.

After a freak accident, Malka becomes crippled and abandoned by her family. She’s taken in by tough Italians who peddle ices to the neighborhood. Though difficult at first, Malka quickly learns business, manipulation, and everything she needs to know about her future calling–ice cream–and how to build the quintessential American brand out of it. From here, Malka, who becomes Lillian after being baptized in the Catholic Church (as part of her scheming), takes us through the fears of WWI, the roaring 20s, the Great Depression, WWII, McCarthyism, the polio scare and eventual vaccine, the advent of McDonald’s, the glitz and glam of the 1970s disco era, and the conservative and religious movements of the 1980s that led to our main character’s downfall–though it’s possible Lillian Dunkle could never actually be brought down.

“The Jewish Quarter” of the early 1900s Lower East Side (photo by Lewis W. Hine and courtesy of the New York Public Library).

Through all of these major events, like Forrest Gump, Lillian plays a major role. In the midst of the polio scare, for example, Lillian helps promote the vaccine (and ultimately her business) by lying that her permanent limp was caused by polio, and why would anybody put themselves at risk of that? As McDonald’s is just starting out, its owners approach Lillian’s husband and son (without consulting her) about using their famous ice cream for their milk shakes. Her husband and son’s negative reception of the proposal was never forgiven by Lillian, especially after McDonald’s became what it is today.

Maybe my being a history buff influenced my opinion of the story, but I loved this framework. Once I figured out what Gilman was doing, I yearned to see how Lillian would next affect American history. Gilman naturally weaves together Lillian’s story with the larger cultural one without their being a disconnect.

But the structure is only part of the four flames. Lillian, though easy to hate, is a strong character who makes no apologies for who she is. This correlates to her character arc. Once she figures out how to manipulate people at an early age (we’re talking seven years old), she never looks back. Sure, she uses this tactic for her own benefit, but it helps people along the way. I mean, anyone who supplies the army with ice cream during WWII can’t be that awful. Plus this woman is more or less a business savant. Her success is proof of that.

“Everybody thinks that once you reach the top, you can lie back on a divan with a goddamn mai tai. No. Wrong. Success is not a mountain climb. Success is a treadmill.” — The Ice Cream Queen of Orchard Street

She also has sayings and speaks in way that is consistent throughout the whole book. Growing up in Russia and speaking Yiddish, she incorporates many of these terms into her conversations even after she learns English and Italian. Meshuggeneh, chutzpah, ganef, kvetch, oy vey (oui oui!), shtick, zaftig. But her English phrases aren’t far behind. “So sue me” becomes a national catchphrase, and every reader is her “darling.”

As Jenny Shank points out in her Dallas News review, Ice Cream Queen ultimately faces an unfair bias and sexism. “This entertaining novel underscores how the whole debate about whether female novelists and their female characters face a greater burden to be ‘likable.'” But who cares if Lillian is villainous and takes advantage of people? Some of our historically favorite protagonists were evil: the Grinch, Frank Underwood, Patrick Bateman, Heathcliff, Humbert Humbert.

This novel brings some serious entertainment, and as Shank points out, “Lillian Dunkle is sometimes sympathetic, sometimes reprehensible, but always fascinating. And that, darlings, is all that matters in telling a good story.” When you mix a strong character, fun plot, and strategic narrative and literary devices, that’s not just a good story though. That’s four flames.

“That’s the thing about luxury, darlings. The moment you become accustomed to it, it is no longer a luxury but a necessity. People forget this.” — The Ice Cream Queen of Orchard Street

6 thoughts on “Life is Like a Box of Chocolates”