Give me some historical fiction, a strong heroine, and some Italia, and, really, nothing can go wrong. Am I right? Or am I right?

Although being in Italy this past February was the best nine days of my life, it had some consequences: a serious post-vacation funk. Yes, my vacation to this beautiful country was so fabulous that it left me feeling depressed that I ever left. My friend Dana knew the cure.

Thank goodness she brought Sarah Dunant’s 2003 hit, The Birth of Venus, into my life three months after returning to the States. I might still be in a post-Italy funk (honestly, it’ll never end), but this novel allowed me to indulge in a few of my favorite things. Now that’s amore. 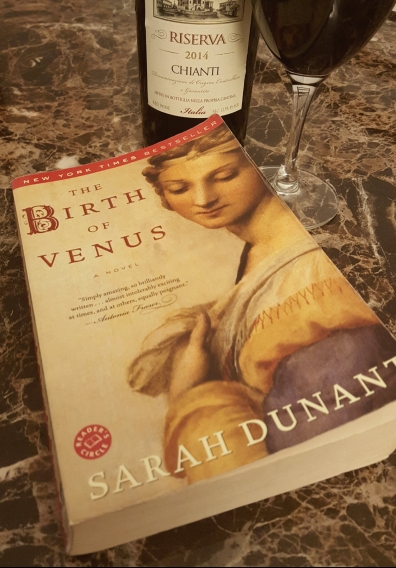 “Confidence is a dangerous thing: too little and you are lost, too much and you are guilty of the other sins that grow from it.” — The Birth of Venus

The Birth of Venus takes us back to Florence and follows our main character, Alessandra Cecchi during the Renaissance. Alessandra is a mere 14, though this isn’t too young to learn just how contradicting the two concepts of passion and duty can be, a theme that resonates throughout the book.

As the youngest of four, Alessandra possesses immense knowledge and independence, has a sharp tongue, and is dedicated to learning and the arts. Her personality and interests diverge greatly from other young girls at the time, including her own mother and sister. These peculiarities lead her to develop feelings for a painter who Alessandra’s father — a wealthy cloth merchant — hires from northern Europe to paint the Cecchi palazzo chapel. Although she can’t quite articulate what she’s feeling, her intuition tells her to keep her distance because family and society would never approve.

Early on in the book, Alessandra is married off to the much older yet intriguing Cristoforo Langella. She’s stuck in a less than fortunate situation, but she still develops a respect and affection for her husband while also recognizing her feelings for the painter. It’s through her interactions with both men that Alessandra departs from her naivety to learn the familiar trope in literature — and in life — that women lead unfair lives and must make sacrifices to protect their families.

“‘My mother used to say that in our land there were enough gods for women to have at least one on their side, while your religion has three in one and they are all men. Even the bird.'” — Erila, Alessandra’s slave in The Birth of Venus

Dunant’s work is beautiful and that’s partly due to how her words reflect the artistic intensity of the time. In her descriptions of art and the characters’ passion for it, Dunant takes us back to Florence in the late 1400s so we can too appreciate its rise and flourish. (And this is coming from someone who admits she doesn’t really “get” art.) Sarah A. Smith agreed in her 2003 review for The Guardian.

“The colours, the textures, the feel of the brush in Alessandra’s uncertain hand as she paints a figure in her family’s newly commissioned chapel; all are so vividly realised it is hard not to share the heroine’s intoxication,” she wrote.

“I stood with my head back, turning myself round and round to see how each wall reached up to the ceiling, until my head was giddy and the frescoes seemed to swim and swirl in front of my eyes as if the figures themselves were moving.” — The Birth of Venus

The intricate language leads us to an intriguing plot with a lot of “WTF” moments. Although I love historical fiction, sometimes when you mix it with romance, it can gravitate toward cheesy, resulting in some big eye rolls from critics. Dunant avoids this altogether, though, by setting Alessandra and her own turbulent relationships against the backdrop of a dangerous political landscape with Girolamo Savonarola at the helm.

As the center of the Renaissance, Florence has always loved and appreciated art and indulged in its riches. This changes under the oppressive leadership of the controversial Dominican friar Girolamo Savonarola. Despite his contentious sermons, he calls the city to leave extravagant lifestyles behind in exchange for one completely devoted to God, and the city listens — at first. Now I’m not talking Florentine citizens asking themselves “WWJD?” I mean burning all jewelry, art, etc. and living a barebones lifestyle.

The tension between Florence and Savonarola is reminiscent of the drama in Alessandra’s life. Florence eventually fights back and so does Alessandra as she discovers who she really is and what’s important to her. Florence breaks free from the friar’s hold, and our lead starts making her own decisions.

“I can still see it now: the glory of Florence conjured up in a hundred deft pen strokes.” — The Birth of Venus

To provide context for these trouble times that actually existed in Florence, Dunant had to give us a lot of subplots. At times, its can feel like too many, which Smith echoed.

“Sometimes [Dunant’s narrative skill] can go awry: the subplot involving the murder of several sexual miscreants is not especially convincing, and the book’s denouement is hurried and unlikely.”

While I concur that the ending’s pace is inconsistent with the rest of the book, I believe all of the subplots play an important role in setting a particular tone. Under Savonarola, suspicions and anxiety ran rampant. The subplot Smith refers to here alludes to just how tense the city was at the time.

Every sentence and subplot serves a purpose in The Birth of Venus. Not once did I ask myself “What was the point of that?” I appreciate the carefully researched details Dunant injects into her novel. If nothing else, they allowed me to once again walk along the Arno River, to cross the Ponte Vecchio, and to gaze upon fresco after amazing fresco just like I did four months ago. The only difference is that this time I wasn’t walking with heaping amounts of gelato and taking pictures at every turn. This time I was watching history being made through Alessandra’s lens, just as she always wanted to do.

“And, such was the sound that the chorus made together, that to have been part of it at all was enough for me.” — The Birth of Venus

One thought on “Back to the Tuscan Sun”