We all know wine gets better with age. Emily Giffin’s following that mantra. Don’t get me wrong, the OG, Something Borrowed, still ranks high on my list of Giffin greats, but there’s no denying that her writing has become more skilled — and her themes deeper — over time. Her newest novel, All We Ever Wanted, illustrates that point, and it’s something she echoed in a Q&A on June 26 to celebrate the release of her new book (also the place where I committed some massive fangirling while meeting her).

In her latest, Giffin tackles the most pressing matters that families face in today’s world. By broaching issues such as rape, sexual assault, social media, technology, etc., she demonstrates that they’re all related and can exacerbate one another. All We Ever Wanted gives us a world where everyone carefully documents their lives through a lens, aka 2018, and where that can have detrimental consequences. 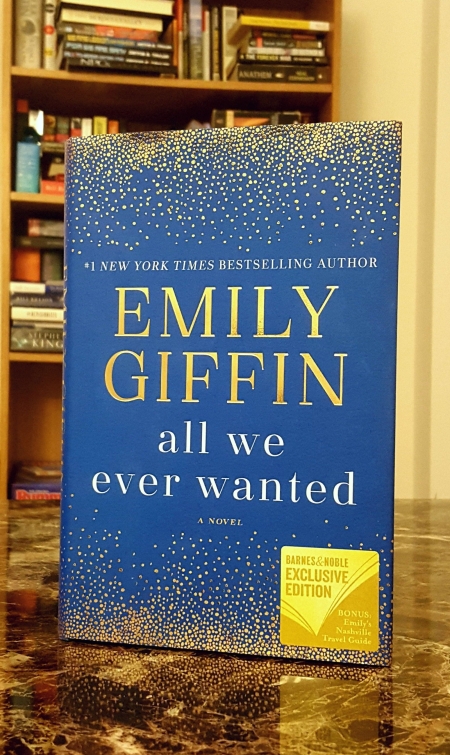 Nina Browning had a modest beginning as she grew up middle class in a small town. Her life changed, though, after marrying Kirk, a longtime member of Nashville’s old money. Their lives went from comfortable to ritzy after Kirk sold his business, and his ego expanded past the size of his giant bank account. This new trajectory has had Nina questioning over the years whether they’re really made for each. She really starts to ponder their relationship after their 18-year-old son, Finch, takes a compromising photo of a classmate, Lyla Volpe, and father and son work harder to maintain their status and Princeton acceptance rather than making amends. (Think of the Dan and Nathan Scott relationship alla season 1.)

On the other side of town, Tom Volpe has worked hard to give Lyla the best life despite her growing up motherless. Although Lyla’s good grades got her into a prominent private high school, the Volpes have always struggled to measure up to their rich peers, who take Finch’s side in the scandal. It seems almost everyone is against them. Everyone but Nina, whose own experience with sexual assault and humble background force her to stick up for what’s right and not just who she loves.

Emily Giffin has never shied away from putting her readers in uncomfortable positions. Her books shine in the gray, and doing the right thing is never cut and dry. All We Ever Wanted feels different from her previous stories though. The “right” and “wrong,” “good” and “bad” in most of her first eight novels involve matters of the heart. All We Ever Wanted launches Giffin into new territory as an author, yet it’s one that’s all too familiar in the real world. Should our kids be on social media? Should one awful decision really ruin an 18-year-old’s life? How we do we stress to our kids the importance of #timesup and #metoo? Do we shelter our kids, or do we expose them to the world’s ugliness.

“Because sometimes you just can’t see the things that are the closest to you.” — All We Ever Wanted

None of these answers are easy, and it takes a certain gumption to tackle them, ergo Nina. Giffin stated during that June 26 Q&A that she respects people who have the courage to change course no matter where they are in life, and it’s a theme she’s often explored in her novels. Rachel fights for love when she has lived her whole life as a perfectionist and people pleaser in Something Borrowed. Josie from First Comes Love decides to have a baby even when life has seemingly prevented that from happening. And in All We Ever Wanted, Nina contemplates giving up her entire life — and all of the glitz and glam she’s acquired since marrying Kirk — when her morals are compromised.

Even just thinking about giving up a mansion worth a few mil takes courage regardless if you actually do it. This quality that Nina possesses makes readers feel like they know her or at least like they want to know and be her. She’s not a regular rich mom. While seemingly “having it all,” Nina just wants to be like the rest of us. In my Ranked post of Giffin’s first eight books, I state that, “[Giffin’s] characters feel like friends, in both relatable and unfamiliar ways, and she paints a badass female lead like nobody else.”

She’s also a great example of how well Giffin characterizes the people she writes about and of her ability to adapt to the voice of individual characters. Many of her books tell the stories through different characters’ perspectives. Somehow, she masterfully always nails the attitude of each character from one chapter to the next. This is especially clear in All We Ever Wanted thanks to the contrasting perspectives among two grown adults (Tom and Nina) and a young girl.

Like any high schooler, Lyla has her immature moments and misguided priorities (showcased by her feeling happy that at least she “looked hot” in said photograph), but she can also be incredibly enlightening.

“‘Some people in Belle Meade do suck. Some people are huge snobs and look down on us. But a lot of them aren’t like that at all. Some of them are just like us, only with more money … and if money and appearances and stuff like that don’t matter, then they shouldn’t matter either way.'” — Lyla from All We Ever Wanted

Through Lyla, Giffin allows us to see these contrasting sides and how issues affect people differently.

“Giffin keeps [the story] moving by alternating perspectives and also by writing truly excellent dialogue, all the more arresting because she gets Lyla’s teenage voice just right,” writes Bethanne Patrick in her Washington Post review. “Both Lyla and Nina must contend with a world centered on patriarchal beliefs, a world that serves neither of them well.”

This is how we know Giffin is a veteran. She knows her characters so well, which makes it easy for readers to know them too. But this is nothing new with her, as all of her books have distinct characterization. Mix this skill with incredible dialogue, current affairs, a throwback to my favorite Giffin gem (I see you, Kirby Rose), and a slew of tough questions, and you get a full five flames for some memorable reading for the summer … or really any season.

Emily Giffin was an absolute treat (and so was Hilary Weissman, per usual).

2 thoughts on “Worth a Thousand Words”