Loneliness comes in many forms. It can be bestowed upon us by our peers, it can be a solace we seek, and it can also be all we’ve ever known. I’m a 26-year-old woman with a solid group of friends across the country, who’s in a happy three-year relationship, and who considers her family dear confidantes. Do I ever get lonely? Of course I do.

Nobody can evade loneliness, but author Gail Honeyman wrote to its all-consuming effects in her debut novel, Eleanor Oliphant is Completely Fine. She told British bookstore Foyles that the idea for her debut novel came to her after reading an article about loneliness.

“When I thought more about it, I realised that there were plenty of potential routes to a young person finding themselves in those circumstances, through no fault of their own, and how hard it can be, at any age, to forge meaningful connections.”

Honeyman’s approach isn’t all somber and sympathy though. Just as the title suggests, the main character is just fine; it’s not her that is different. It’s everyone else and the social norms that confine them that are mind-boggling. (Read Eleanor’s opinion of wedding registries, and you won’t disagree.) What Honeyman gives us is a beautiful novel that’s equal parts hilarious and heartbreaking, something that evokes laughter while you simultaneously reach for a box of tissues. 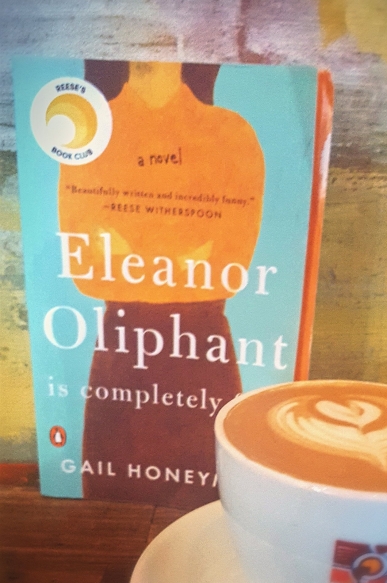 Thanks for the inspo, Idea Coffee NYC!

Eleanor Oliphant is a woman of her own world. For the past eight years, she’s never called in sick to work or used the extent of her vacation. She takes an hour lunch break in the staff room every day where she does her crossword puzzles (hence her profound articulation). She almost always eats pesto pasta and salad for dinner, speaks to her mother every Wednesday, and on Fridays, she eats a margherita pizza at the nearby Tesco Metro, followed by a bottle of Chianti and two bottles of Glen’s vodka, which last only for the weekend.

She has her routine, and that’s how she likes it. Thank you very much. She doesn’t need nor want attention and compassion from her coworkers or anyone else she meets either. She’s Eleanor Oliphant. And really, she’s fine. Fine fine fine.

“If someone asks you how you are, you are meant to say FINE. You are not meant to say that you cried yourself to sleep last night because you hadn’t spoken to another person for two consecutive days. FINE is what you say.” — Eleanor Oliphant is Completely Fine

Until she meets Raymond, the new IT guy at work who illustrates exactly what is missing in her life and the benefits of confronting your demons. He shows her the biggest heart she’s ever known, and she begins to realize maybe there isn’t only one way to live your life.

The thing about Eleanor is she’s been through some real shit. As the book progresses, you learn exactly what’s been haunting her since her childhood and why she seeks such a strict routine. Her life has been anything but normal, so naturally, normalcy is the one thing she yearns. And while readers, including myself, might not believe in her idea of “normal,” Honeyman makes you question exactly what that means and the social construction behind those beliefs.

“A woman who knew her own mind and scorned the conventions of polite society. We were going to get along just fine.” — Eleanor toward her new cat, Glen

“… I started to wonder why the band was singing about, presumably, the Young Men’s Christian Association, but then, from my very limited exposure to popular music, people seem to sing about umbrellas and fire-starting and Emily Brontë novels, so, I supposed, why not a gender- and faith-based youth organization.”

But really, why do we sing about the YMCA?

Or how about social interactions? Why is it that “looking good” merits more conversation and respect from those around you than simply being yourself?

“Was this how it worked, then, successful social integration? Was it really that simple? Wear some lipstick, go to the hairdressers and alternate the clothes you wear? Someone ought to write a book, or at least an explanatory pamphlet, and pass this information on.” — post-makeover Eleanor

This theme blends into a world of mental health issues and how society perceives them. Honeyman breaches this topic with ease as she mixes humor and sensitivity. To tackle such a complex matter with the perfect tone — and to really understand (and agree with) Eleanor’s points of view — meant this book had to drip with Eleanor’s personality; it couldn’t manifest the vague.

“I felt that Honeyman’s writing lent itself to really create Eleanor’s voice in my head. You knew exactly how she sounded, down to her inflections and quirky outbursts,” said my friend Hilary.

I couldn’t have said it better myself, Hil.

For example, Eleanor has a tendency to make jokes to herself that are followed by her profession of laughter. When she says, “Tipsy equals tips,” and then giggles silently, I not only laughed, but I could also picture a woman sitting nearby smirk to herself at her own inside jokes. Hell, I’m that woman every single day.

This book so embodies the character it portrays, and I never had to question who this person was. Honeyman illustrates her so clearly, and in the midst of it all, you can see her begin to change without Honeyman explicitly describing it. She slowly starts to engage with the world around her, judge people less, and realize the influence her past has had on her — and how hard she’s been trying to keep it at bay. Her character arc is beautiful because not only does she start living a fuller life and opening her heart in the process, but she maintains the essence of Eleanor, proving that we never have to be anybody special. We just have to love and be ourselves.

“… In principle and reality, libraries are life-enhancing palaces of wonder.” — Eleanor Oliphant is Completely Fine.

Possibly because this book has been on every list around in the past year, Reese Witherspoon’s media company, Hello Sunshine, will be producing a cinema version of Eleanor Oliphant is Completely Fine. Reese has proven her literary prowess, so keep an eye out for a sure hit in 2019!

You're simply the best, kiddo. Thanks for all the love, laughter, and life you've brought to our family these last four years. I love you more than you'll ever know. Happy 4th birthday, Adalyn!