Remember my post about July 4th reads? It’s time to add one more.

What can I say about this book besides it was a roller coaster of emotions? Oy vey. I actually think my body and mind morphed into Eliza Hamilton’s. At one moment, I was praising Alexander Hamilton as the greatest American who ever lived — oh how we should bow down.

The next, he was the scum of the earth.

Then, he was OK. A typical man. Nobody’s perfect after all.

Then came the existential depression.

And just as Monroe was ushering in the Era of Good Feelings to our country, I was starting to balance out again too.

The capricious emotions this book evoked are nothing new; in fact, they symbolize America’s complicated relationship with Hamilton. We want to love him, but his many faults don’t always make it easy. I’m sure the Mrs. would testify to that. 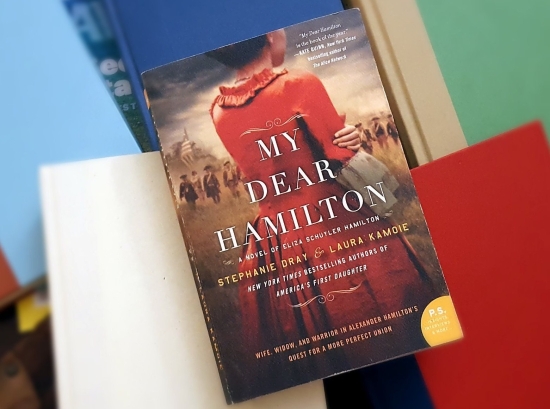 “There is, in a marriage, as in a nation, a certain amount of storytelling we do to make it understood. Even if those stories we tell to make our marriage, or country, work don’t paint the whole picture, they’re still true. But to leave Alexander Hamilton out of the painting entirely is a lie.” — Eliza in My Dear Hamilton

While much has been written about General Hamilton, including one of the greatest musicals known to man, the intricate details about and stories of his wife, Elizabeth (or Betsy or Eliza), are much less available mainly because she left behind little perspective. Don’t for one second, though, think that Eliza Hamilton (née Schuyler) sat in the background as her husband rose to fame and success and then fell from grace. No, Mrs. Hamilton was every much a patriot as her husband, and because she lived to the age of 97, she outlasted many of her male contemporaries whose ideals she shared and supported. Fortunately, My Dear Hamilton gives us that female perspective we so desperately need about a man so contentious in history.

“… To my mind, it appeared that Alexander was in the process of single-handedly laying out the foundations for everything the American union might yet become, of creating the better world he’d promised to create.” — Eliza about her husband, Alexander, in My Dear Hamilton

Stephanie Dray and Laura Kamoie start their grand story in 1777 when Eliza — a general’s daughter and a blossoming patriot — was a mere teenager. As she watched her father lead the American militia and grieved the loss of her family’s estate after the Battle of Saratoga, the patriotic spirit started to fire inside her. Often viewed as a tomboy, she was enthralled by her father’s position as a general and even traveled with him to a meeting of the Six Nations where the Iroquois adopted her — a rare honor that she treasured her entire life.

Give it up for Papa Schuyler.

Soon after and due to her father’s position as a general, Eliza began meeting more prominent members of the fledging country’s military, including her future husband, Alexander, an aide-de-camp to General George Washington. Although he was known as a “tom cat” around the camp sites, Alexander fell for Eliza, “the finest tempered girl in the world,” who challenged his mind and work, could stomach the harshest physical and emotional pain, and whole-heartedly supported the revolutionary cause. She was the only one who could make him settle down … or so she thought.

“His enthusiasm for the project of building a nation — for thinking ahead — helped give me much-needed courage that we would win this war.” — Eliza about her husband, Alexander, in My Dear Hamilton

The rest of My Dearest Hamilton chronicles the plethora of ups and downs the Hamiltons faced, including the Federalist Papers, the Reynolds affair, and the death of their first-born, giving insight not only into Alexander’s genius but also the female mind that forever had an impact on his life. Despite his intense love for this woman, we now know — more than 200 hundred years later — that Alexander was no saint. But as the book concluded, he likely did more for this country and its people than any other figure in history despite his scandals. His story reminds us that every hero has his or her flaws, which is something Eliza had to make peace with after his death.

The authors are explicit in their notes that this is a work of fiction; thus, not every part of the story is true, some moments and emotions are guessed at, and some are definitely dramatized. However, they use historically accurate prose (or summaries of it) wherever possible, which leaves you feeling right in the middle of the Revolutionary War. The level of research is no joke either.

“Because words were his weapon, silence was mine. And he couldn’t win an argument if I didn’t start one.” — Eliza in My Dear Hamilton

While I had hoped this book would answer so many of my questions about the Hamiltons, I faced the cold reality that these are truths we may never know.

How exactly did the first sex scandal in American history occur? Were there multiple affairs? Was there something odd happening with Eliza’s beloved sister Angelica. And what was this passion between him and his fellow veteran, John Laurens? Did Hamilton ever fire against Burr? Was he actually innocent?

WHY DID HE CROSS THE RIVER IN THE FIRST PLACE?

And most importantly, in this context, what was Eliza thinking throughout it all?

My passion for this truth (and the countless internet searches it has demanded) partly stems from my love for the time period but also from the power of Dray and Kamoie’s words. They had me hooked from page one, and major credit is due for their storytelling abilities. Every emotion that the characters experienced pulsed through me, and at one point, I really did have to set the book aside (just to voraciously open it up the next day) because I was so mad at where the plot had gone.

I wasn’t mad at the book, not even close. I was mad that, over 200 hundred years ago, Eliza couldn’t escape the emotions that I was feeling here in 2018.

Furthermore, the abundance of detail in this book allows intense psychoanalysis of the characters and places you right at their kitchen table. I always say the sign of literary greatness is that a book transports you exactly to where and when the characters are, and I can’t properly describe how well the authors do that in this masterpiece. They so clearly illustrate these individuals, and these specific characterizations last for all 600+ pages through their dialogue, thoughts, and interactions. We can also experience each character’s growth — from the days of being a bright-eyed patriot to being a pessimistic and stubborn politician and from being blinded by love to being blinded by hate. I closed the book feeling as if I had become these people.

As if I had helped write George Washington’s Farewell Address. As if I had been cheated on and made a fool. Af if I too had known what it was like to have yearned for Alexander Hamilton and his brilliant mind. And as if I had played as much a role in this country’s founding as the men. I too had been a hero of American Revolution — if only for the span of this book.

I probably would have fallen in love with My Dear Hamilton even if it had been poorly planned, researched, and written simply because of the content. Fortunately, nothing about this book was inadequate. Thank you, Stephanie Dray and Laura Kamoie, for giving the Hamiltons the justice they deserve.

Now, where is my tricorn?

2 thoughts on “You’ve Got Me Feeling Emotions”