You know that feeling when one of your favorite singers comes out with an album that you so desperately want to love, but you’re just like … no … ? You keep listening in the hope that it’ll spark some kind of desire, make the head bop just a smidgen to the left, but after five tries, still … no … ? That’s how I felt about Justin Timberlake’s Man of the Woods (I fought with myself over it!), and that same feeling emerged with Fahrenheit 451.

I’ve been immensely disappointed in myself for never reading it in my 26 years. It’s not just a classic, but it says so much about literature and society. I had convinced myself (and the world had convinced me) that I would fall in love with this remarkable book when I finally got around to it.

Until I didn’t fall in love. I fooled myself into thinking my enjoyment would commence once I started understanding it a bit more. The truth is it took far too long to really be “in the know,” and even after that happened, I realized this book did very little for me. Bradbury’s classic sci-fi novel earned an extra flame for its message, but ooh ooh I was not on fire with this one. 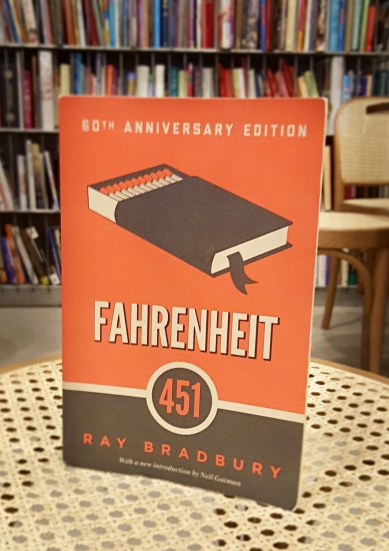 “The good writers touch life often. The mediocre ones run a quick hand over her. The bad ones rape her and leave her for the flies.” Fahrenheit 451

Fahrenheit 451 takes place in a sad, dystopian American future where books are banned from society. The main character, Guy Montag, is a firefighter; rather than putting out fires, though, they start them on the books people try to smuggle and on the homes that hide them, with 451 degrees fahrenheit being the temperature at which book paper burns. Citizens don’t need literature — or at least so they’re told — all they need is the giant televisions people have erected in the walls of their homes where they can spend all day with their “family” (i.e., TV characters). In this world, entertainment is more important than learning, thinking, and growing.

Montag goes along with putting out fires and his pill-addicted wife, no questions asked, because it’s the only life he’s known. Then he meets Clarisse, an unusual young neighbor who talks of crazy ideas, such as sitting on front porches and conversing with your family and how books — not TV — can fulfill you. His interactions with her make him start to question the shallow space that society has inhabited.

The premise of this book strikes me, and it always has. The fact that ironically this book has a history of being banned from libraries is even more appealing. Bradbury’s approach, though, failed to ignite more than just a couple of flames. Yes, all of the puns intended.

“You always dread the unfamiliar.” Fahrenheit 451

First, this book is quite unmanageable to read. As Montag recognizes just how absurd the world is, he starts to go off the deep end a little bit. To find reality, he has to first lose touch with the present. This causes him to talk to himself, speak in circles, and have solo outbursts, making it very difficult to follow along. This subtext is not lost on me, but it needs to be crafted clearly enough for readers to grasp the plot. This reader had a tough time doing that.

Furthermore, many of the literary devices and characters need fuller descriptions. The Hound, for example, sounded easy enough at first. Discerning that it’s an eight-legged robotic dog that lives in the firehouse and could kill people, however, didn’t happen right away. I inferred that The Hound represented the dangers that technology can impose on us — as do many aspects of the book — but the extent of his power took awhile to interpret. These flaws distracted me from any strengths the book possessed.

“And for the first time I realized that a man was behind each one of the books. A man had to think them up. A man had to take a long time to put them down on paper. And I’d never even thought that thought before.” Montag in Fahrenheit 451

In the New York Times this past May, Ramin Bahrani wrote an essay about how Fahrenheit 451 was the book of our social media age. The piece was written in conjunction with the movie released earlier this year, which Bahrani wrote and directed and, sadly, I’ve heard garnered even fewer flames than the book.

“For Bradbury, books were repositories of knowledge and ideas,” Bahrani wrote. “He feared a future in which those things would be endangered, and now that future was here: The internet and new social-media platforms — and their potential threat to serious thought — would be at the heart of my adaptation.”

The relevance of this book in today’s society is honestly a little frightening. As Bahrani points out, how easy would it be for someone to change Ben Franklin’s Wikipedia page to say he was a fireman who burned books.

“In his way, Bradbury predicted the rise of “alternative facts” and an era of “post-truth,” Bahrani wrote.

Talk about foreshadowing by Bradbury of our current climate.

For these reasons, I was convinced I had a stunner on my hands. Everything this books says and stands for is why I wanted so badly to like it; this was supposed to be something that people in 2018 needed to read. Up until the last page, I was sure it would stir something inside of me. However, the mere idea of something is never good enough, which I think Bradbury and Montag would agree with me on. It has to be properly executed, and for me, this book’s construction did not justify its main point.

But at least the book served its purpose: Its message was heard loud and clear.

“This book has pores. It has features. This book can go under the microscope. You’d find life under the glass, streaming past in infinite profusion.” Fahrenheit 451

2 thoughts on “Storied: My Cooled Desire”