“Storytelling is fundamental to human beings.”

Lisa Lucas wrote this line in a recent piece for TIME about how books are anything but dead; yes, they are alive more than ever. Although I give credit where credit is due, this declaration from Lucas, the executive director of the National Book Foundation, is far from novel (no pun intended).

Of course storytelling is an innate part of being a human. It’s why our parents tell us stories before we go to bed. It’s why we dream at night. It’s why we listen to music and why we crave the songs’ backstories. It’s why we give speeches to honor and celebrate people at parties, weddings, funerals, etc. It’s definitely why, as Lucas argued, books are not dead. It’s also why we need them to continue to flourish.

That’s right. I said continue. As in books already are flourishing. 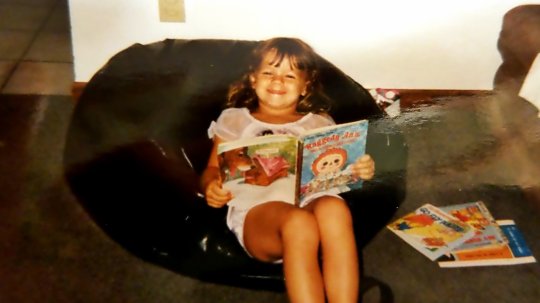 I mean, look how cute I was.

Books have played such an integral part of my life. I have an array of memories, ranging from minuscule to grand, where books were every much a character as was I. In pre-school, I remember proudly finishing Dick and Jane books and, one year later, my kindergarten teacher professing how great my love for reading was. My mom seemed pretty stoked about this. Then, when the fifth and sixth Harry Potter books came out, she had to give orders on how long my brother and I could read them so we wouldn’t hog the one copy we shared. Reading was an equal opportunity in our household.

By the final installment, she realized buying two copies was worth the money.

I remember reading Where We Belong for about 20 hours straight and crying in my shabby college apartment, and I’ll never forget five years later crying on a much less shabby couch as I finished The Last Lecture.

I have more memories with books than I do with some people. I know I’m not alone in this either. I talk to friends and family about what we’re reading almost every time I see them.

I know what you’re thinking: You have a book blog; of course your friends ask you about books. This was happening long before Big Little Lit was ever a nugget of an idea. Actually, those constant conversations and the need of my friends and mine to always discuss what we were reading were the catalysts for starting this blog.

The point of this post isn’t to dissect every book memory I’ve ever had because that post would never end. The purpose is to argue side by side with Lisa Lucas and say that books are not dead. They are thriving, and we are a better world because of it.

Take this paragraph from Lucas’ article:

“After more than a decade of decline, the number of independent bookstores is on the rise — despite the dominance of online retailers. The American Booksellers Association, which promotes independent bookstores, says its membership grew for the ninth year in a row in 2018. Sales of physical books have increased every year since 2013, and were up 1.3% in 2018 compared to the previous year.”

I can’t think of one time when I’ve gone into Barnes & Noble, and it wasn’t packed. Even a few weeks ago when I went at 9 p.m. on a Saturday night. One hour from closing and people were perusing away, happy as can be. I’ve seen a change in independent stores too; sure, their numbers don’t compare to the book behemoth mentioned above, but there’s no doubt people are flocking to these quaint shops as well.

While I still see more people with headphones one the subway than a book in their hand, the amount of public transit riders who are reading makes my heart swell. I’ve stopped many people on the train to ask what they’re consuming and vice versa.

That’s one of the best things about reading: It connects us. Now, more than ever, people yearn for that connection, and they yearn for stories that help build those blocks. Books do that more than any other hobby we have. Why? Because everyone loves a great story.

Some might saying reading is a solo act, but I disagree. Not only are you interacting with the characters in the book, but you’re also experiencing something with the author and with everyone you share and discuss that book with.

Reading is not dying, and it never will. It’s the one thing that’s endured throughout human existence. We want those stories, and we need those stories.

So for all the naysayers out there who say it’s a dying activity, this is for you: Reading is a living, breathing art form that will withstand the test of time because it already has.

Lisa Lucas, I’ll fight the good fight with you.