The best artists turn inexplicable pain into art and beauty. Jeannette Walls places herself in that category by detailing her childhood in her incredibly honest memoir, The Glass Castle. Despite living a life that most of us can’t imagine, Walls somehow manages to tell her story without it being colored by hindsight. Rather, she tells it through a child’s lens. Through it all, she demonstrates how love can distort your opinion of someone but also that silver linings and good memories can be found in even the toughest of times. 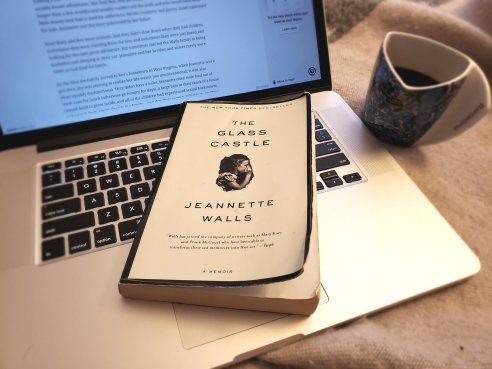 Jeannette Walls and her three siblings were born to parents who weren’t cut out for child-rearing. Her mom, Rose Mary, had a tendency for laziness — which led to rarely holding a job — and cared more about her dreams than her children, but her free spirit usually meant adventures. Her dad, Rex, was an alcoholic who couldn’t keep a job for longer than a few months, struggled to tell the truth, and would steal what little money they had to feed his addictions. Yet his creativity and genius mind captivated his kids. He was most adored by Jeannette, his “mountain goat,” he affectionately called her.

Rose Mary and Rex were natural-born nomads, and they didn’t slow down when they had children. Sometimes they were running from the law, and sometimes they were just bored and looking for the next great adventure. But sometimes this meant homelessness and sleeping in their car, and it always meant extreme poverty, which led to the Walls children rarely being clean and always being hungry.

“I lived in a world that at any moment could erupt into fire. It was the sort of knowledge that kept you on your toes.” — The Glass Castle

By the time the family moved to Rex’s hometown in West Virginia, when Jeannette was a pre-teen, she was starting to realize her life wasn’t just unconventional; it was also morally unacceptable and dysfunctional. They didn’t have a toilet, Jeannette often stole food out of trash cans for lunch (otherwise go hungry for days), a large hole in their shack of a house caused mold to grow inside, and all of the children had experienced sexual harassment and assault from adults close to the family — about which their parents failed to do anything. At this point, the mental health issues could no longer be ignored.

Because they had essentially fended for themselves since birth, the Walls children started thinking about breaking away when they entered high school and using their courage and bravery for their own survival. When Jeannette was 17, she moved to New York City, where her older sister, Lori, had been living for a year. Her roots would continue to haunt her as she worked her way through Barnard College and eventually became a well-known society writer. Her early adult life was plagued by bouts of shame that were coupled with persistent affection — and sympathy — for her family.

“One benefit of Summer was that each day we had more light to read by.” — The Glass Castle

When you hear a summary of Jeannette Walls’ life, you immediately condemn her parents and abhor them for the hardship they forced on their children. The official description of the book, though, illustrates that the surface doesn’t tell the full story.

“[Walls’] is a story of triumph against all odds, but also a tender, moving tale of unconditional love in a family that despite its profound flaws gave her the fiery determination to carve out a successful life on her own terms.”

This is where The Glass Castle derives so much of its power. This story isn’t just about hardship and having the perseverance to overcome it. And it’s not about regretting who and where you come from. Never did I question that these six individuals loved each other. Yes, Rex and Rose Mary weren’t cut out to be parents, and they clearly didn’t know how to not put themselves first for anything or anyone. But they did love their kids, they always tried to make the most of their unusual situation, and they gave them special memories. Also, talk about a ton of laughs.

“One thing about whoring: It put a chicken on the table.” — The Glass Castle

One touching memory that stayed with Jeannette throughout the book was when her father took her “demon hunting.” One night when they were living somewhere in the desert out west, Jeannette couldn’t fall asleep because she thought something was slithering underneath her bed. She ran to her father to express her fears. Rex entertained the idea that he’d seen some demons lurking around, so he grabbed his knife and led her on a hunt to find the “chickenshit.” It became a ritual for the two.

Another memory from the book that I kept returning to was Jeannette describing what a poor driver her mother was. Once, while driving through town, Rose Mary claimed the breaks weren’t working. Jeannette and her younger brother, Brian, stuck half their bodies out the car widows and yelled to passersby and traffic that their car couldn’t stop so they should get out of the way. The car was eventually stopped by a dumpster.

“‘Things usually work out in the end.’
‘What if they don’t?’
‘That just means you haven’t come to the end yet.'” — The Glass Castle

These recollections are the foundation for both happy memories, as well as trauma that would stay with the Walls children for the rest of their lives. We start to see the author’s evolving perception of her family in a very implicit fashion. Her changing mind and opinion are never directly expressed to the reader. They’re gradual and told through her actions and, then, slowly, and only when survival must take precedence, through her thoughts.

Never does she directly speak of her disapproval of her parents and their lives. She only implies it when she writes of enjoying the long hours at school while working on the school newspaper because this gives ample opportunity to dig through the kitchen trash. Or when she continually brings up Brian sleeping under a cardboard box to avoid the leaking roof above his “bed” or the decline in excuses she makes for the dismantling (and incredibly dangerous) steps to their front door.

The latency of Walls’ writing perfectly matches the slow realization over time of the hardships she’s endured in her life. Not rushing the plot or emotions when you’ve experienced this pain firsthand takes incredible restraint. Real power comes from keeping emotion disguised behind written words just as you had disguised them vocally when they were first felt. These skills showcase her talent as a writer and explain why The Glass Castle has become such a success.

“Whoever coined the phrase ‘a man’s got to play the hand that was dealt him’ was most certainly one piss-poor bluffer.” — The Glass Castle

Throughout it all, Walls never asks for sympathy. She’s willing to smile and laugh along with you, which makes her heartbreaking story equally heartwarming — and why The Glass Castle easily earns five flames.

*Want to hear more? Listen to a conversation of the The Glass Castle on my podcast, The Biblio Files, which can be found at the link or on your favorite podcast platform.*