C’mon, this book takes its title from a Fleetwood Mac song. How could I not be drawn to this?

Most women have that one guy in their past. You know the one. Most likely, but not always, a cliché bad boy. Someone who drove you crazy in both good and bad ways. The one who took a long time to get over. The one who still pops up in your memory every now and then.

Well, that drama, of which we all have a relatable anecdote, is the subject of Carola Lovering’s debut novel. Because it’s a story we all know, it’s a story that can be challenging to tell. How can you write this dilemma in a way that feels fresh yet relatable? Lovering sort of accomplishes this in her sexy book, but the ways that make it feel new are also the ways that make it incredibly frustrating. 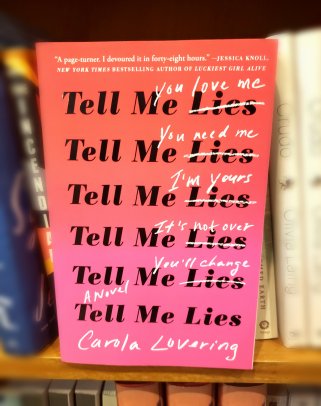 “Well, time and space give you clarity, and sometimes you don’t realize things until … you do.” — Tell Me Lies

Lucy Albright has had a fortunate upbringing. But a big house on Long Island and a supposedly tight-knit family aren’t everything. Lucy desperately needs to escape, which is why she chooses a small college in California for the next chapter of her life. College — even with its drugs and booze — aren’t enough to forget home, especially her mom’s mistakes, which have haunted her since her early days as a teenager.

He’s charming, fun, smart, witty, good at sex, and cute in his own way, and he’ll tell you exactly what you want to hear and exactly what will get him out of a sticky situation. Lucy isn’t immediately drawn to him when he first shows interest, but soon she finds herself wrapped up in his lust.

Their chemistry keeps them intertwined on and off for seven years. He cheats, and so does she — multiple times — so they can be together. She makes countless questionable and life-altering decisions to be near him. It’s a scary co-dependency fueled by a lot of cocaine and sex and the need to escape from reality and youth. And it’s a co-dependency not too far from reality.

“Manipulation is not a bad word. It’s not a cynical mind-set. It’s a proactive approach to exploiting opportunities.” Stephen from Tell Me Lies

For her part, Lucy makes terrible decisions and doesn’t care about anyone, including herself, but Stephen. Their personalities and their effect on one another make for a nasty combination destined for disaster — and make you want to bang your head on something.

I’ve never been one to immediately dismiss a book with unlikeable characters — that’s just reality, and sometimes people suck. But Stephen and Lucy are too much to handle. The hatred, self-destruction (seriously, these kids have drug and alcohol problems), and general lack of respect for others grates on my nerves. I could not care less about these characters.

Which makes me question if I too am as heartless as Stephen. Clearly, they both suffer from mental health problems, something I admittedly have always struggled to understand and accept. Cut me some slack: I’m from a very practical Midwestern family. In some odd way, at the end, I was able to see past their annoying ways. They helped me better understand that mental health isn’t black and white and issues related to it don’t fit into a perfect box.

This is where Tell Me Lies scores the biggest points for me. I most relate to the character Jackie in this way. As Lucy’s best friend, she can’t understand why Lucy continuously returns to Stephen and puts her whole life on hold for him. It even causes a rift between the two best friends. I’ve been Jackie before and could easily place myself in her shoes.

“It’s funny — when you get what you want, it almost automatically decreases in value.” — Tell Me Lies

Jackie comes around, though — just like I did while reading this book — and realizes she’s boxing in her friend. Eventually, Lucy starts living her own life, away from all of the addictions, including Stephen, who had the potential to ruin her life.

“The ending is perfect, as Lucy figures out the dark secret Stephen has kept hidden and learns the difference between lustful addiction and mature love,” writes Kirkus Reviews. That ending allowed me to breathe a sigh of relief that seven years (seven years!) wouldn’t turn into an eternity and that Lucy could healthily move on with her life.

I firmly believe Lovering purposely made her characters so infuriating to 1.) shed light on mental health issues and 2.) make this relatable and timeless story somewhat refreshing. You can partially (or maybe fully) connect with Lucy’s story, but by amping up the aggravation, Lovering provokes readers to feel something different and creates a new narrative in the process. Plus, keeping those strong qualities, which can elicit such a strong reader reaction, at the forefront of a novel is no easy feat. But she keeps it going all the way through.

4 thoughts on “No, You Can’t Disguise”

My boys: Kyle and Charlie.