America loves its Friday nights on the gridiron. Small towns showing up to the stands in droves as they cheer on their teams of young boys with big dreams. It’s quintessential Americana. It loves it so much that, when a nonfiction book was published about it (along with many other sociological themes) in 1989, a movie by the same name premiered 15 years later and a TV show two years after that. They both starred the great Connie Britton, so you know they have reach and power.

Yes, Friday Night Lights and everything it represents and demonstrates has become ingrained in American culture. Clearly, we’re all a little obsessed with high school football. But with three types of media focused on this theme, which one does Big Little Literature love most?

Although I’ve also watched the television series, that was five years ago, and my memory necessitates more time to relive the show than the movie. So we’re going to narrow our focus a bit. Friday Night Lights, it’s time to go toe to toe: book versus movie. 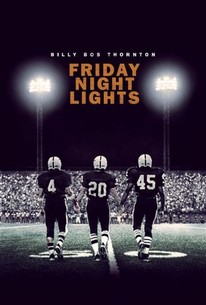 Plot is the essence of art, whether it be books, TV, or movies. If you don’t have a solid plot, you don’t have solid art. You could say a lot about society, you could make me laugh or cry, but if you can’t engage me in the storyline, I’ll probably turn the channel or close the book (unless it’s Seinfeld, which mastered the no-plot scheme). This category right here is a big one.

Winner: Book. To be fair, I enjoy the plot of both book and movie. I believe they differ in content, with the former focusing more on the town and societal themes and the latter addressing mainly the game (see round 3 for more). Some may argue this difference gives FNL, the movie a more-focused plot. Touché. I would contend that this makes the plot lose a bit of its essence and what makes the original idea so special.

The essence of Friday Night Lights extends far from the 100 yards on a field, all of which H.G. Bissinger covers and does so exceedingly well. He combines every element into a multi-dimensional plot without making the book seem disjointed. In contrast, the movie moves too fast, as do the lives and even the games. Suddenly, the Permian Panthers are in the playoffs without much of the context that got them there. We see some games, but they’re not enough to cover a season full of emotions; both physical and emotional pain; and the blood, sweat, and tears that the players endure. The book moves slower, but I don’t view this negatively. Its slow burn generates all the right feelings and all the right scenes. You may not speed through it with an intense desire to discover the team’s fate — though it’s certainly possible — but that just gives you time to soak in everything Bissinger says.

“Gentlemen, the hopes and dreams of an entire town are riding on your shoulders. You may never matter again in your life as much as you do right now.” — cinematic Coach Gary Gaines.

I admit this round will inherently give the upper hand to cinema. It’s quite literally visual. But the best writers bring words alive and paint a picture for their readers. Let me introduce you to Kevin Kwan, J.K. Rowling, and Colson Whitehead. So how do Bissinger’s visuals compare with those on the silver screen?

Winner: Movie. This round’s winner does not mean that the book’s author fails to deliver visually. His writing, especially during the final football game, evokes such feeling and intensity that you can see the scenes before your eyes.

The movie has a special effect though. While scenes and dialogue don’t speak much to the economic crisis and social crisis happening in Odessa, the visuals certainly do. The muted colors of the movie illustrate the bleakness that encompasses Odessa, and it’s possible that the artistic creators intended for the artistry to tell this side of the story.

*Just to be clear, I wrote the above lines before doing any movie review research, which is when I came across this very similar quote from the New York Times’ 2004 review:

“… It was photographed (by Tobias Schliessler) in hard, desaturated tones that emphasize the bleak, sandy landscape.”

Should I also be a movie critic? (LOL.)*

My review of the book argues that Bissinger creates social commentary rather than just writes a book about sports. The best kind of sports-related art — may that be writing, cinema, TV, etc. — explores the many social themes that surround the competition. It should never just be about the plays in between the clock starting and stopping. Would anyone care about Remember the Titans if it didn’t discuss the racial underpinnings of the early 70s? If Coach Carter didn’t portray unruly, inner-city kids with little chance of winning at life let alone basketball, would we watch?

Winner: Book. The movie does explore social themes outside of the field. It mentions addiction and unhealthy parent-child relationships (damn, Tim McGraw is good). It also echoes the dangers of believing sports are your end-all be-all and of living through your children.

It doesn’t, though, really touch on the economic crisis that’s happening in Odessa. A main tenet of Bissinger’s book is that this town pours so much money into the school’s football program when money is something few people have. Bissinger criticizes the town’s backward priorities (regarding money, education, and more), especially in hard times.

Most importantly, the movie says little about the rampant racism in Odessa. It barely mentions race relations, and Boobie Miles is part of the team and praised until the end. The ugliness that outcasts him in the book is nowhere to be found in the cinematic portrayal. While I read the book, I struggled to read the nasty words that spewed from the citizens and the players, and it didn’t matter that “this was the 80s.” The gross attitudes and language were unacceptable; had Bissinger left that out, the book would not have been an accurate portrayal of the town and team. And, frankly, it would have lost a lot of power, which happened with the movie.

I assigned the book four flames, and I’d most likely assign the same to the movie. There’s one big reason why I’d choose the latter in a toe-to-toe battle: The movie mainly focuses on a high school football team that has become the epicenter of its town, whereas the book truly provides social commentary and perspective.

Round three presented a clear knockout, and you may notice that this reasoning leaked into the two preceding rounds. Sure, I love watching mesmerizing plays and players’ near-obsession with their sport; that’s how true athletic prowess, greatness, and inspiration are borne. However, sports wouldn’t mean much to me if they were just that: sports. To me, they say so much about the fabric of the social and economic times. An epic sports story does the same.

*If you want more, check out this episode of The Biblio Files (available in the link or on your favorite podcast platform) as I break down my thoughts about the book and movie with my ole man, a former football player himself.*

One thought on “Toe to Toe: Friday Night Lights”