If you’ve ever read my to-do list, you may have noticed that some books have been on there for a long time. I admit I love to keep up with the times and read the hottest books at that moment, which means I often never get to literature that’s been knocking at my door for some time.

A Gentleman in Moscow had previously been first on that list because, yes, I’ve been wanting to read it since before I started this blog three years ago. So many friends have claimed they loved this book, many of whom I share similar literary tastes. It’s also historical fiction and takes place in Russia after the Bolshevik Revolution. After reading The Patriots, this time period has become one of my obsessions. I need to know more and travel to Russia some day. C’mon, Amor Towles’ novel is perfect for me.

So why hadn’t I ever picked it up? *sigh* Words evade me, though I can tell you the gentleman was worth the wait. 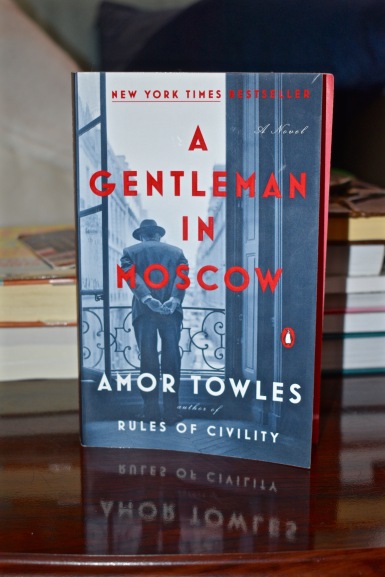 “For what matters in life is not whether we receive a round of applause; what matters is whether we have the courage to venture forth despite the uncertainty of acclaim.” — A Gentleman in Moscow

Count Alexander Rostov was born into fortune, and according to the Bolsheviks and those who take power in 1920s Russia, that’s a crime. At 30 years old, and after writing some “shocking” poetry, he is sentenced to house arrest at the Metropol Hotel near the Kremlin. While he expects to live out his life in the lavish suite in which he’s occupied for four years, he’s surprised to learn he’ll have to rid of many possessions to move into the hotel’s attic — quite the downgrade.

As the decades unfold, this witty, polite, intelligent, and genuine soul befriends the hotel’s staff, of which he even becomes after some point, and meets many hotel guests — some of whom frequent the Metropol. This includes a young, bright girl named Nina. She has many questions for the count, including how to become a princess, and teaches Alexander all of the hotel’s secrets. She even bestows upon him a key that allows him to learn every crevice his new home has to offer.

As she grows older, Nina comes under trouble as the tumultuous times in the country become more distressing, and she calls on Alexander for help. He must fulfill a role he’s never had to occupy before. He will also have to transform the small life he’s created and to which he’s adapted while the larger world seems to be crumbling.

“… If one did not master one’s circumstances, one was bound to be mastered by them …” — A Gentleman in Moscow

I originally rated this book four flames, and I can think of only one explanation for that: my preconceived notions. For some reason, I truly believed there would be riveting action, and the main characters would experience incredible hardship. I was imagining extreme poverty, harsh winters, and forced labor. I guess you could say my imagination got this best of me, but this was Russia in the early 20th century after all!

But the characters, for the most part, saw these difficult times on the periphery and were indirectly affected. That’s not a negative though. In fact, I believe Towles did this intentionally because, by doing so, he was sending a powerful message about Russia during this time. The true trauma of the times was sugarcoated or hidden from public eye and from the rest of the world. For example, even The New York Times downplayed the Soviet famine of the early 1930s. (Seriously, read that link. There’s so much to learn.) Sure, many people knew travesties were occurring and rights were being taken away, but was the whole truth being perceived?

I’d argue no. Russia at this time was also a complex place with varying degrees of oppression and deprivation unfolding over many years and decades. A Gentleman in Moscow — and particularly through the count — utilizes the more-passive rising action to represent this scene and experience.

“This is not a novel of thrilling conflicts so much as charming encounters,” writes Ron Charles of The Washington Post. “Yes the novel offers more high tea than high adventure, but this is a story designed to make you relax, to appreciate your surroundings, to be a person on whom nothing is lost.”

You literally don’t have a choice when you’re on house arrest (much like the days of COVID-19).

The events I had anticipated would have seemed out of place for the sophisticated main character and his residence. (Also, house arrest in a worldly hotel wasn’t that terrible for the count, all things considered.) My expectations were far-fetched, and now I fully support and respect Towles’ decision-making in keeping the novel’s events on par with the atmosphere of the time. No doubt he knew what he was doing.

As he did while writing the character of the count. But did Towles know that he was creating this beloved and likable of a character? I literally want the count to be my friend or grandfather — or dare I say lover.

“… As a species we’re just no good at writing obituaries. We don’t know how a man or his achievements will be perceived three generations from now, any more than we know what his great-great-grandchildren will be having for breakfast on a Tuesday in March. Because when Fate hands something down to posterity, it does so behind its back.” — A Gentleman in Moscow

Towles fully fleshes out this sophisticated man. We understand him in entirety by the end of the novel because Towles delivers the entire backstory and writes every scene so that it encapsulates Rostov’s person. It’s quintessential characterization. Did I mention the count’s wit, charm, class, and humor; his caring, moral, and level-headed spirit; and how he approaches and views every experience with intrigue? All of the things!

I may be in love with this man. See the above link, and you’ll realize I have some competition with Charles from WaPo.

A Gentleman in Moscow gives us some solid lessons to learn too. It reminds us of the simple things in life and how taking them away can be the most painful. Having a certain spice for your meal may seem frivolous and unnecessary, but when it becomes unattainable, it turns into a gaping hole. These simple things make life so grand, and the count fully knows this, which only adds to our love affair with him. He also knows that those closest to you teach you the most and that our relationships make life vivacious. Forgetting these nuggets can be the pitfall of society, and Alexander Rostov’s attitude and actions express that.

As I was wrapping up this review and the more I thought about why Towles didn’t include heartbreaking and fist-clenching drama and the more (and more and more) I wrote about how much I loved Alexander, I realized preconceived notions are just that: preconceived. They should have nothing to do with my overall opinion of this book, which I loved from start to finish. That’s exactly why it deserves five flames.

“For that matter, what can a first impression tell us about anyone? … By their very nature, human beings are so capricious, so complex, so delightfully contradictory that they deserve not only our consideration, but our reconsideration — and our unwavering determination to withhold our opinion until we have engaged with them in every possible setting at every possible hour.” — A Gentleman in Moscow