Let’s get one thing straight: A happy ending isn’t always sunshine and daisies. Sometimes they don’t end up together; sometimes the person with the terminal disease doesn’t miraculously pull through; sometimes questions are left unanswered. For me, a happy ending doesn’t mean being overjoyed; it simply means it’s powerful. It proves that sometimes a story ends with a little roughness around the edges because not everything in life is so cut and dry, perfect and jubilant. As long as the storytelling ends on a solid note, I’m a content reader.

I’m not sure Miss You got that memo. Because I read this 2016 novel en route from Florence to Rome and then to New York, I had a lot of uninterrupted time to become acquainted with the characters, to really dive into their lives. I felt a connection, like I was walking through life with them. That says a lot about the writer, Kate Eberlen, and that’s also why the ending seemed to serve such an injustice to 400 pages of beautiful writing and character development. I’d spent 16 wonderful years with these characters before a too-perfect finish skewed my opinion of the book. 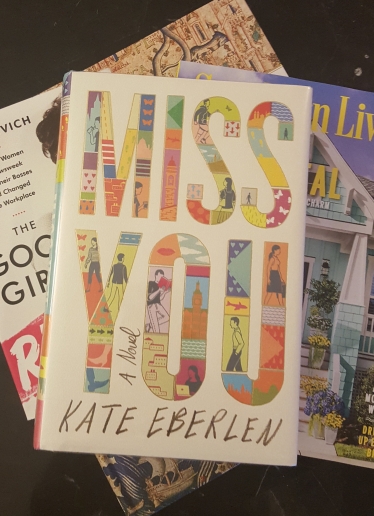 Although they don’t know it when they first meet in Florence at the age of 18, Tess and Gus are soulmates. He’s traveling with his parents as they all try to move on from a death that rocked the family, and she’s backpacking through Europe before starting university — the goal she and her mom have been working toward since she was a little girl. They briefly bump into each other on three separate occasions (thanks for the gelato rec, Tess; it was great) and continue to run into each other without recognizing one another for 16 years.

Throughout their lives, both experience devastating heartbreak that causes life to not turn out the way they expected. Health problems, loss, and affairs all present large challenges that they manage to overcome. Did I mention affairs? Everyone’s having them apparently. Although they’re always in close proximity, Tess and Gus actually don’t communicate or recognize each other until they’re both back in Italy 16 years after Tess first asked Gus, then a random stranger, to take a photo of her and her friend. They’re both taking chances to finally pursue their passions. It’s only fitting — a little too fitting — that they would finally meet while doing this.

“When people talk about nature and nurture, I think they forget that nurture works both ways.” — Miss You

Most reviews I read compared this story with One Day (I reference the movie because I admit I haven’t read the book). I don’t really agree considering Tess and Gus have no idea who each other are throughout these 16 years, but I didn’t mind that. In fact, I quite enjoyed witnessing separate character development so that when they reached the precipice of fate, they’d be their true selves. As Kirkus Reviews writes, “[Eberlen’s] characters are carefully connected by proximity and circumstance. It’s as if their shadows are moving in sync from opposite sides of a screen.”

It’s how the next phase unfolds that brings down my overall opinion to three flames.

The worst part about this book was that I really loved it — enough for four flames — until the last chapter. I was flying through it in anticipation of how they’d overcome numerous obstacles and how this would eventually bring them together. Alas, the ending was so anticlimactic and the opposite of what this story deserved. The scenes took off too quickly, and a connection between the two characters was too instantaneous. The ending was filled with naivety and a childlike energy that contrasted poorly with the rest of the book’s pacing and emotion. The ending felt cheap.

Kirkus also comments on this, though it doesn’t have such a rough reaction to it. “It’s a bittersweet moment when their timelines finally converge years later, as there isn’t much time before Eberlen lets the curtain fall.”

I know books can be like movies where things seem too good to be true, especially chick lit. This was extreme though. There was no magic in the ending; the tension that had been building at a perfect pace burst too quickly.

“I keep getting little rushes of excitement, tiny bursts of adrenaline zinging through my limbs, making me light-headed with happiness and nerves all at the same time.” — Miss You

Some readers might not mind this type of ending, though; if that’s you, seriously pick up Miss You. Even if cliché endings aren’t your thing, maybe you can get over the last 30 pages better than I did. This novel really was heart-felt, and it had just the right amount of quirk and humor. It made a 9.5-hour flight fly by (no pun intended), so that says something. It’s just too bad that my final opinion was so heavily influenced by the final few pages. But I can’t and I won’t get over it.

One thought on “So Much for My Happy Ending”