There’s no sense in beating around the bush here: I am one big wuss. I don’t mean physically (though I did go to the emergency room so early on with appendicitis that the doctors had a tough time diagnosing it). I’m talking anything and everything related to the horror scaries.

I refuse to watch scary movies or TV shows. If it has an inkling of creep, just count me out. I made the mistake of watching Paranormal Activity in theaters (younger Beth was more easily influenced by men), and I had nightmares for days. When I made the mistake of watching the sequel one year later, I vowed to never allow myself to be exposed to such fear ever again.

Except maybe in books.

It’s true: I do enjoy some mystery when I read, which is why I vowed to read more thrillers this year. Maybe it’s easier to put up a wall between a book’s fiction and that of the silver screen. Because I have to imagine it in my mind, maybe I envision something less scary. Who knows with this brain, but I do know I was excited to pick up Ruth Ware’s new book, The Turn of the Key (shout out to Lauren Murphy for this borrow). With this book though, Ware made me so intensely scared while also forcing me to turn each page with shaky hands that it made me love and fear the genre all at the same time. Let’s just say this was a bit of a mind f***. 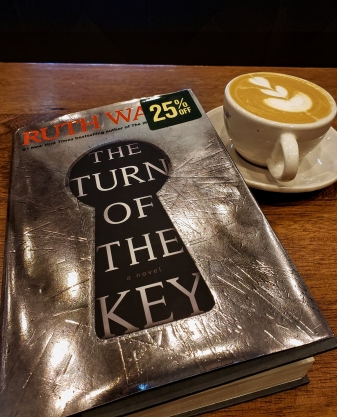 Rowan Caine wasn’t looking for a new job (for many reasons) the day she stumbled upon an ad for a live-in nanny in Scotland. The minute she enters Heatherbrae House, though, she feels off balance. For one, it mixes Victorian with ultra-modern, and the sharp contrasts throughout are a bit jarring. It’s also a smart house that puts its inhabitants under constant surveillance. But it’s one comment from the owner, Sandra Elincourt, that puts Rowan slightly on edge: The family has gone through a slew of nannies in the past year because they all claimed the house was haunted.

Surely, the nannies were just looking for excuses to leave. Could a house really be haunted? The house is luxurious with great views, and the gig pays big. How could Rowan not say yes? She doesn’t believe in the supernatural anyway. Upon her first night, though, when Sandra and her creepy husband, Bill, take off for a work trip, things gets weird. First, there’s the constant creak in the loft space above her bed — a creak that sounds an awful lot like footsteps. Then she learns of the scientist who used to own the house and his daughter who died there. And who can forget the iPad that awakes the whole house with loud noises in the middle of the night or the mysterious worker Jack who lives on the property?

When you add it up, maybe the previous nannies weren’t so crazy after all. Maybe they got out at the right time, which is what Rowan should have done before one of the children dies on the property. She’s innocent though. She just is, which is what she’s trying to explain to her lawyer in the letters she writes from jail — the letters that tell the story. Heatherbrae House could push anybody off the deep end but enough to kill a child? Or is there a creepier story behind the scenes?

If Ruth Ware’s goal was to scare the bejesus out of me, she succeeded. This book frightened me so much on a subway trip to Brooklyn that I had to call my mother on the 10-minute walk from the subway to a friend’s house. I was so certain that every human I passed would attack me at any moment. These were completely irrational thoughts for which I blame (and applaud) Ware.

“People do go mad, you know, if you stop them from sleeping for long enough.” — The Turn of the Key

Part of my jumpiness can be attributed to the actual source of fright in The Turn of the Key. As much as I love a good mystery, I do not do ghosts, spirits, demons … especially not demons. Nope nope nope. I’ll take an ax murderer over the paranormal any day.

But the main reason Ware had me jumping out of my britches is because every word and action was meticulously planned and had a purpose — not too different from the author who created the friendly ghost above. Nothing in this books happens by chance or consequence. Even something so simple as touching a necklace or removing a sock has greater meaning than what’s on the surface. Because of this, as a reader, you can never escape the terrifying emotions and paranoia felt by Rowan. You become her in everything she thinks and feels.

Then there’s the fact that this story never lets up, and the freak and creep work their way through the very last page.

“And [the end is] when Ware’s gifts for structuring an ingenious suspense narrative really come to the fore,” writes Maureen Corrigan in her Washington Post review. “Because just when the story seems to be winding down, losing steam, Ware pulls out a stunner on the penultimate page that radically alters how we interpret everything that’s come before.”

The jumpy reader in me was begging for the climax and for the rational truth to emerge. Please, let there be a reprieve. The book-lover and writer in me, however, rejoiced in the fact that this story really wouldn’t close until I did the same thing to the book. It’s one thing to keep suspense high from start to finish; it’s another to introduce a new motive and evidence on the last page AND without it feeling like the story just dropped without rounding itself out. Ware lays down the clues artfully from the get-go; it’s up to the reader to piece them all together.

But I can’t stress enough the biggest reason for why Ware definitely mastered her craft in her latest novel. Despite the anxiety that ensued from the The Turn of the Key, I believe that the bigger the fright, the bigger the triumph when it comes to mysteries or thrillers. That’s all readers — even the biggest wusses — can ever ask from this genre, and I’m already wearily anticipating her next addition.

One thought on “Sleep with One Eye Open”